Hosted and magical performances by the maniacal and mysterious, 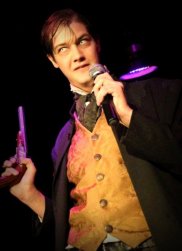 Aleister Crane has been hiding in your attic for decades making those scraping noises that keep you awake thinking, “is that a body being dragged across the floor?”

For the last couple of years he has made a point of coming out of the shadows and “entertaining” the good citizens of Vancouver with Comedy of Terrors and other ghoulish events. Tricks and treats abound wherever Aleister goes, bringing with him a despicable sense of humour, a ghoulish sense of style and often an item or two from his “Museum of Misfortune.”
Beware, kind people. Turn up the lamps and shutter your windows. Aleister Crane is in town and he knows what you’re afraid of.

Burlesque performance by the vivaciously provocative

The diva with bluster and a ghostly luster! Gidget (formerly Voodoo Pixie) has been performing burlesque for seven years in a variety of styles; known as the ‘Demented Debbie Reynolds’ and the ‘Dame of the Deep’, her love of the strange and macabre is what she is most famous for. She is the co-creator/producer of Vancouver’s only yearly horror show ‘AbraCadaver Cabaret’ She  co-produced and co-hosted ‘Comedy of Terrors’ and hosts the horror discussion podcast ‘Dark Entries‘. She has performed at the Burlesque Hall of Fame (Movers, Shakers and Innovators Night), the Vancouver Burlesque Festival, and the New Orleans Burlesque Festival. In her spare time she is an aspiring seamstress, washboard player, and podcaster.

Burlesque performance by the creepily curious

Emma Eldritch is a local writer, producer, and burlesque performer who revels in the macabre and occult. She is one of the co-producers for Abracadaver Cabaret and a member of the Screaming Chicken Theatrical Society

A disgusting musical performance by

Mr Little has played over forty character roles in the last ten years. Favourites include celebrities and historical figures such as Richard Nixon, Paul Lynde, Carol Channing, Lotte Lenya and Oscar Wilde in ‘Sherlock Holmes and the case of the Jersey lilly’ (Directed by William B Davis). Mr Little is currently producing shows with Spectral Theatre Society, of which he has been a member since 2006. 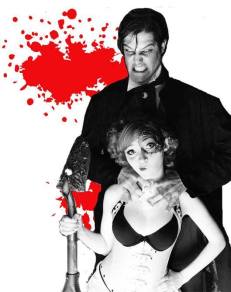